Our surveyor was called to a hotel in Droitwich, Worcestershire to undertake an asbestos survey.

On going down to the basement to further the survey, it became apparent that asbestos was rife in this area of the property. It was heavily contaminated, it had hard set thermal insulation (lagging) present which was very badly damaged. In this particular basement there was a lot of asbestos found and it’s associated debris to floors and walls.

In addition, the actual boiler room had had a “strip” about 20 years ago with the lagging being replaced by man-made mineral fibre sections. Except this “strip” was literally that – pulling the bulk of the material off the pipes without properly controlling the cleaning; so the modern lagging was literally just sat over the asbestos debris. All valve points, gasket points etc remained heavily contaminated and the free fibre load on the floors and walls was very high. 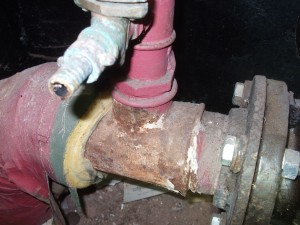